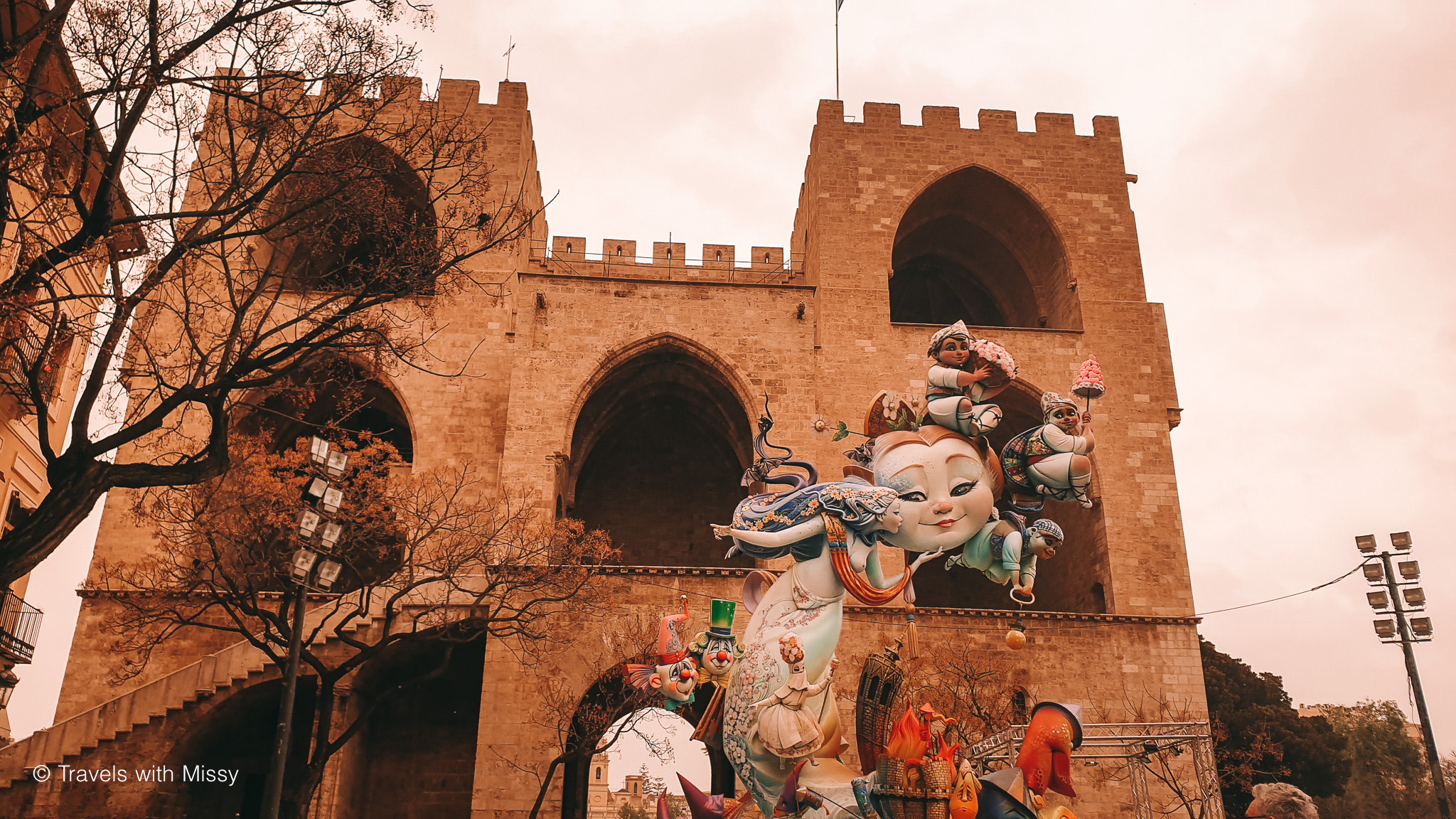 Las Fallas takes place throughout the month of March and culminates in a week-long display (Fallera Week) of fireworks, parades, and ornate papier-mache artworks being displayed before being set alight. It’s bonkers and I loved every single second of it!

One of the most unique aspects of the festival is the ninots. These are life-size puppets that are dressed up and placed on display throughout the city. At the end of the festival, they are set on fire in a massive bonfire.

The Las Fallas Festival is also known for its vibrant parades and fireworks displays. In recent years, the festival has become increasingly popular with tourists, who come from all over the world to experience its one-of-a-kind traditions.

Throughout this guide, I’ll explain what Las Fallas festival is, and what you shouldn’t miss out on when visiting Valencia during one of Spain’s biggest festivals. And like most things in life, sometimes you just need to experience it to understand how wonderful it is.

What is Las Fallas?

The Las Fallas festival is held every year in Valencia, Spain. The festival is a celebration of spring, and it takes place over the course of several days in March. During the festival, giant papier-mâché puppets called ninots are displayed throughout the city.

On the final day of the festival, the ninots are burned in a huge bonfire known La Crema. Las Fallas festival is a hugely popular event, and it attracts visitors from all over the world. If you’re ever in Valencia in March, be sure to check it out.

The History of Las Fallas

Las Fallas is a Spanish festival that dates back to the Middle Ages. The festival celebrates the arrival of spring, and traditionally, giant effigies of paper mache were burned in the streets.

Today, Las Fallas is still celebrated with bonfires, but the effigies have been replaced by smaller statues called ninots. Las Fallas is held every year in the city of Valencia, and it attracts visitors from all over the world.

The festival lasts for five days, and it culminates with the Burning of the Ninots. On the final night, all of the ninots are placed in a single bonfire, and they are burned amidst much fanfare. Las Fallas is a festive and vibrant celebration, and it is one of Spain’s most beloved traditions.

When is Las Fallas Festival?

Ask a number of Valencians when Las Fallas festival starts and you’ll get a range of answers. Traditionally it starts on March 1st – 19th. The culmination of the celebration is from the 15th to the 19th, which is also one of the busiest weeks of the festival.

From the 15th to the 19th, there are several important events that occur throughout Valencia. Read on for what to expect during Las Fallas and the key events to watch out for.

What to expect during Las Fallas?

There are several key events during the latter part of the festival that are worth experiencing. From the 15th to the 19th, Las Fallas ramps up its festivities and non-stop partying. Read on to learn more about the unmissable events of Las Fallas.

Throughout most of March, each of the neighborhoods is busy creating their fallas, but by the night of the 15th, they must be finished creating their fallas, as the judges visit each one on the 16th to vote on their favorite ones. They also select one of the ninot’s (the child fallas) to be saved from the burning.

Most fallas have a message behind each one. Whether it be a political stance or commentary on Spanish politics, it’s good to have a local to explain what the message is behind some of the fallas you’ll discover around the city.

The flower offering or ofrenda is a procession from each of the neighborhoods throughout the week that culminates in a final stop at the Virgen de los Desamparados (also more commonly known in Valencia as the Geperudeta aka the hunchback), the patron saint of Valencia in the Plaza de la Virgen. The falleros are dressed in traditional costumes, men in ornate traditional costumes and the women in stunning (and expensive) dresses that are incredibly resplendent.

I found the ofrenda to be one of the most interesting parts of Las Fallas and was incredibly moved throughout the numerous processions and watching as her dress took shape in the thousands of flowers that were offered to her by the falleros and falleras.

Throughout the month of March, you can prepare for little sleep as the nights are spent celebrating the creation and displays of the Fallas. Marching bands parade around the city at all hours of the day, and most late evenings have a firework display.

During the night of the 18th at around 2 am (usually in the middle of the night sometimes), you can expect the largest fireworks display known as ‘Nit del foc’, night of fire, an enormous firework display in Paseo de la Alameda.

The Mascleta are daily fireworks show that takes place at 2 pm during the Las Fallas festival in Valencia, Spain in Plaza del Ayuntamiento. The firework show lasts for about 8 minutes and features loud and explosive fireworks displays. The reverberations of the buildings and the fireworks exploded creates an earthquake effect with the ground shaking beneath your feet. If you are sensitive to noise, this might not be for you.

The sun gradually disappears beneath the heavy clouds of fireworks and the air becomes dense with smoke. It’s an incredible sight to see and definitely one of the highlights of Las Fallas!

Where to watch the Mascleta

If you want to see the best view of the Mascleta, head over to Plaza del Ayuntamiento. This square is located right next to City Hall and offers a great view of the action. Get to the Plaza early, as it gets extremely crowded and busy with thousands of Valencians celebrating the Mascleta.

Note: I wouldn’t recommend getting too close if you have small children as it might be frightening (unless they have noise-reducing headphones), or if you have heart problems.

La Crema is the biggest and most important event in Las Fallas de Valencia. Occurring on the 19th of March is when all the incredible Fallas will be set alight and burned. The culmination of all the festivities comes to an end with a bang and it’s a night where you can expect a lot of merriment and excitement.

8 pm – the ninots are burned first.

10.30 pm – head to Plaza del Ayuntamiento for the final fire of the winning fallas.

Fallas is a festival of noise. Throughout all hours of the day, there are marching bands wandering the streets and children setting off firecrackers. It’s an explosion of noise and merriment.

I awoke most nights at 2 am or even 4 am to marching bands outside my window, so if you are staying in accommodation with single-glazing windows, just be warned, you might not get a full night’s rest! It’s hard to be mad when its just so much fun!

If you’re planning on visiting Valencia for Las Fallas, you’ll want to stay in one of the neighborhoods where the festival is most vibrant. A great neighborhood is El Carmen, which is located in the heart of Valencia’s historic center. During Las Fallas, El Carmen comes alive with music and dance, and there are often impromptu parties in the streets.

My stay in Valencia during the festival was based in El Carmen and it was incredible. The historic center of Valencia is a great place to base yourself and especially during the chaos that is Las Fallas. With non-stop noise (brass marching bands at 3 am), El Carmen is unlike anywhere else in the city.

Another great option is the neighborhood of Benimaclet, which is home to a large number of students. This means that the atmosphere during Las Fallas is electric, and there are plenty of bars and clubs open late into the night.

Closer to the events of Las Fallas, you’ll find a number of walking tours that explain the history of Las Fallas and Valencia that I can highly recommend. I loved my walking tour of Valencia which took us around all the hidden spots of the old city and included wine and tapas too. The guide was incredible and it was definitely one of my favorite tours I’ve done in some time.

The weather in Valencia for the Las Fallas festival is usually a balmy 16-18 degrees celsius. I recommend packing a warm jumper and a light jacket in your suitcase. During my visit in 2022, Valencia experienced a sand storm from the Sahara desert which turned the city and sky orange with dust. But for the most part, you can expect good weather and may even experience a little bit of rain.

How to get to Valencia and Where to stay

The best way to get to Valencia for Las Fallas is by plane. There are multiple airports that serve the city, including Valencia Airport (VLC), Alicante Airport (ALC), and Murcia-San Javier Airport (MJV). You can also take a train or bus from Madrid, Barcelona, or other major cities in Spain. Once you’re in Valencia, you can get around by bus, taxi, or metro.

If you’re looking for a place to stay during Las Fallas, there are plenty of hotels and hostels in Valencia. However, be aware that prices will be higher than usual due to the increased demand during the festival.

Macflats Ayuntamiento // Stunning apartments that are centrally located in the historic center of Valencia. They also come equipped with double-glazing windows (A MUST during Las Fallas).

Vincci Lys // Stunning 4-star hotel in the city center, close to the train station and all the happenings of the festival.

For a more authentic Las Fallas experience, you can also stay with a local family in their home (called a casa particular). This is a great way to immerse yourself in Spanish culture and meet new people. Whatever you decide, make sure to book your accommodation well in advance!

So if you’re looking for a unique and unforgettable experience, be sure to add the Las Fallas festival to your list of must-dos. Just be warned that it can get pretty crowded (and loud!) so choose which events you want to attend wisely. And don’t forget to enjoy some of the delicious food and drink that Valencia has to offer while you’re there!

How To Get From Dublin Airport To Dublin City Centre